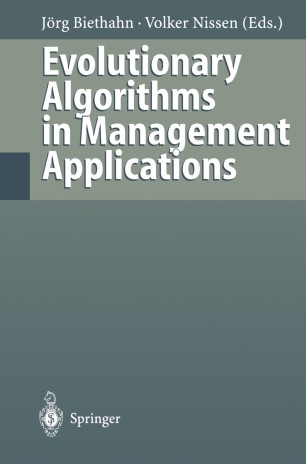 Evolutionary Algorithms (EA) are powerful search and optimisation techniques inspired by the mechanisms of natural evolution. They imitate, on an abstract level, biological principles such as a population based approach, the inheritance of information, the variation of information via crossover/mutation, and the selection of individuals based on fitness. The most well-known class of EA are Genetic Algorithms (GA), which have received much attention not only in the scientific community lately. Other variants of EA, in particular Genetic Programming, Evolution Strategies, and Evolutionary Programming are less popular, though very powerful too. Traditionally, most practical applications of EA have appeared in the technical sector. Management problems, for a long time, have been a rather neglected field of EA-research. This is surprising, since the great potential of evolutionary approaches for the business and economics domain was recognised in pioneering publications quite a while ago. John Holland, for instance, in his seminal book Adaptation in Natural and Artificial Systems (The University of Michigan Press, 1975) identified economics as one of the prime targets for a theory of adaptation, as formalised in his reproductive plans (later called Genetic Algorithms).