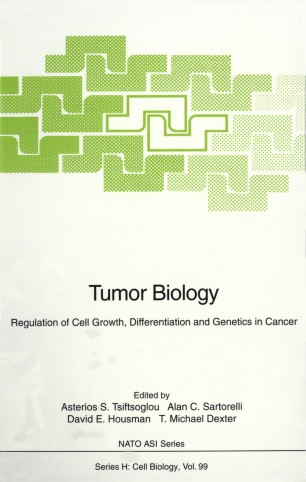 Regulation of Cell Growth, Differentiation and Genetics in Cancer

With the aim of providing an international forum for the communication of both the basic and clinical aspects of molecular and cellular biology of cancer, a NATO ASl was held in Porto Carras, Halkidiki, Greece, September 1-12, 1995. The principles as well as recent developments in tumor biology were discussed in depth, with emphasis on the regulation of the cell cycle, differentiation, programmed cell death (apoptosis) and genetics of cancer. This book constitutes the proceedings of that meeting. Specifically, the following areas were addressed: (a) enzymes and proteins (cyclins) that control the cell cycle, as well as the role of m as gene in meiosis and transformation; (b) the structural basis for specificity in protein-tyrosine kinase reactions; (c) the differentiation of normal as well as neoplastic cells with respect to molecular mechanism(s) by which chemical agents or growth factors trigger maturation; (d) phenotypic and genetic aspects of apoptosis; (e) the role of growth factors, like IGF-l, FGF, TN, IL-6, etc. , in cell cycle regulation, apoptosis (cell death) and senescence; (f) molecular mechanisms of transcriptional activation of globin genes and stability of mRNAs related to growth proteins and iron metabolism; (g) the cellular and molecular biology of bone marrow hemopoiesis; and (h) neurotrophic factors and the generation of cellular diversity in the central nervous system. It was obvious from the studies presented that neoplastic cell growth, differentiation and apoptosis in many cell types are regulated at several levels.