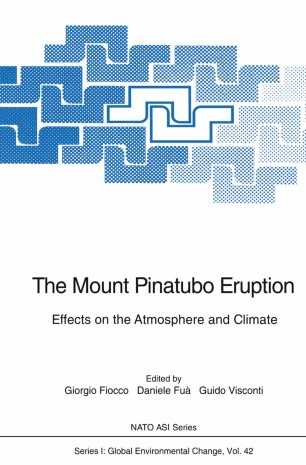 Effects on the Atmosphere and Climate

The NATO Advanced Research Workshop on "The Effects of the Mt. Pinatubo Erup­ tion on the Atmosphere and Climate" was held in Rome, September 26-30, 1994. In addition to NATO, the workshop was supported by Accademia Nazionale dei Lincei. The Organizing Committee was fortunate to enlist the participation of many of the experts in the field, and this book is an account of their contributions. The eruption of Mt. Pinatubo in June 1991 was readily recognized as one of the major eruptions of the century. In a sense it was the global experiment the atmospheric scientific community was waiting for to assess theories developed on ozone depletion and greenhouse warming. In September of that same year the launching of the UARS satellite added a new tool for observers all around the world. Three years later was a good time to convene a NATO Workshop to sum up what had been measured and theorized about the effects of the eruption. This book is divided in four chapters which cover respectively: the characterization of the aerosol cloud, the measured or simulated effects on temperature, on ozone and on climate.