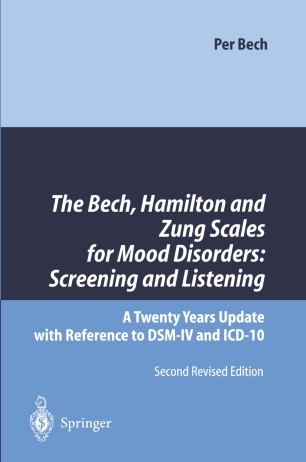 The Bech, Hamilton and Zung Scales for Mood Disorders: Screening and Listening

In its second edition this volume covers the most frequently used mood rating scales such as the Hamilton Depression Scale (HAM-D) and the Zung Scale. The Major Depression Rating Scale has been revised to correspond more strictly to ICD-10. A new appendix combines didactically the WHO (Ten) Well-Being Questionnaire, the WHO (ICD-10) criteria for depression, and the Major Depression Rating Scale. Furthermore, the Calgary Depression Scale for Schizophrenia has been included. The scoring sheets and the corresponding manuals of the scales are presented along with documentation of both internal (coherence) and external (discriminating and predictive) validity.