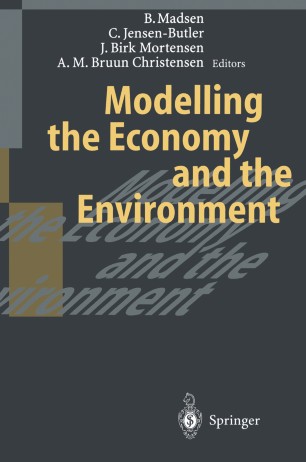 Modelling the Economy and the Environment

This book is based upon contributions to a Scandinavian conference on Transport, Agriculture and the Environment in a Regional and National Development Per­ spective: Quantitative and Modelling Approaches, organised by AKF, the Institute of Local Government Studies, Denmark, which was held on the Danish island of Bornholm in December 1993. The chapters represent leading edge research in Scandinavia at the end of 1993 into modelling relationships between the economy and the environment, embracing both regional and sectoral perspectives. The publication of this volume will hopefully contribute to dissemination of knowledge about the very active Scandinavian research tradition in this field, a research tradition which is related to a long-standing engagement of Scandinavian countries with environmental issues. The contributors come from Denmark, Norway and Sweden and the collection is prefaced by two chapters from well-known Dutch researchers, traditionally re­ garded by Scandinavians as close neighbours to the Scandinavian modelling tradition. The support of S0M (Society, Economy and Environment), an open research centre financed by the Danish Environmental Research Programme, and of AKF in the organisation of the original conference and the preparation of this book is gratefully acknowledged. It was with great sadness that the editors learned of the death of one of the contri­ butors, Poul Erik Stryg, during the preparation of the book.