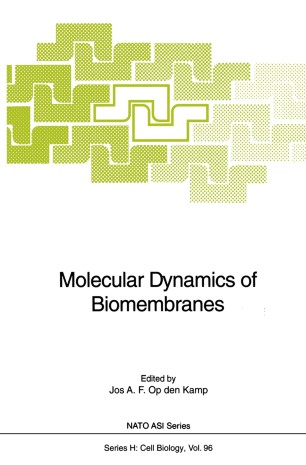 Protein insertion and translocation, intracellular traffic and sorting of membranes and their components, and lipid-protein interactions were the main topics of the Advanced Study Institute on "Molecular Dynamics of Membranes", which was held in June 1995 in Cargese, Corsica, France. The course, co-sponsored by NATO and FEBS, was the fifth in a series that started in 1987 and takes place every two years in the Institut d'Etudes Scientifiques in Cargese. This Institute, ideally situated and fully equiped for this type of scientific meeting has greatly contributed to the great success of the courses. Of course, also the outstanding contributions of a large number of well known scientists and the enthousiastic participation of excellent graduate students and postdocs has given the "Cargese Lectures on Biomembranes" a firm reputation in the scientific community. The present proceedings is more than just a reflection on the information presented in the Course. First of all it contains a number of extensive reviews of specific areas of interest. Noteworthy are the articles dealing with: • the general mechanisms of protein transport, the roles of invariant chain in antigen presentation, protein import and export in E. coli, protein folding and the role of chaperones, chloroplast and mitochondrial protein import, • membrane traffic in general and during mitosis, and with respect to membrane lipids: lipid domain formation, lipases: an extensive review about structure and properties, phospholipase A2 and bioactive lipids, phospholipid transfer proteins, • phospholipid localization and mobility and, finally, new strategies for protein reconstitution.