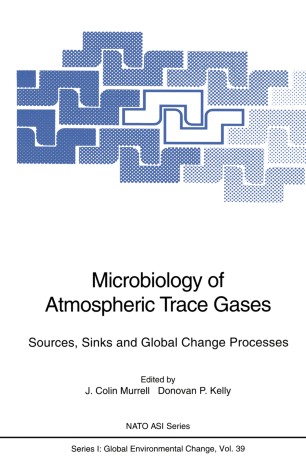 The chapters making up this volume are based on the presentations given by their authors at the NATO Advanced Research Workshop (ARW) , also entitled "The Microbiology of Atmospheric Trace Gases: Sources, Sinks and Global Change Processes", held between 13-18 May 1995 at II Ciocco, Castelvecchio Pascoli, Tuscany, Italy. Four reports of Working Group discussions on aspects of trace gas microbiology and climate change are also included in the volume, prepared by rapporteurs designated at the ARW. All the papers here presented have been subjected to peer review by at least two referees and corrections and amendments made where necessary before their acceptance for pUblication in this volume. The ARW was set up to address a wide range of issues relating to atmospheric trace gas microbiology and the organizing group was aware of the burgeoning of studies on gas metabolism and on global effects of atmospheric trace gases over the past two decades. This research effort has led to a number of specialist and generalist meetings including the triennial series of symposia on the metabolism of one-carbon compounds, colloquia concerned with dimethyl sulfide and its precursor, DMSP, through to the Intergovernmental Panels on Climate Change, which have addressed the impact of increasing levels of atmospheric carbon dioxide, methane, nitrous oxide and chlorofluorocarbons on global climate. Over recent years methane and nitrous oxide showed rates of increase in the atmosphere of 40-48 and 3-4. 5 Tg/year, respectively.