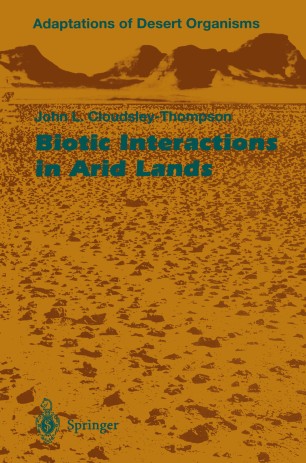 The exigencies of life in the desert environment have resulted in the se­ lection of a diversity of adaptations, both morphological and physiologi­ cal, in the flora and fauna. At the same time, many plants and most small animals are able not merely to exist but even to thrive under desert conditions - mainly by avoiding thermal extremes and by the refine­ ment of pre-existing abilities to economise in water. In the same way, the biotic interactions of the flora and fauna of the desert do not involve many new principles. Nevertheless, conditions in arid regions frequently do invoke refinements of the complex interrelations between predators and their prey, parasites and their hosts, as well as between herbivores and the plants upon which they feed. In this book, I shall discuss not only such interactions and their feedback effects, but also community processes and population dynamics in the desert. The physical conditions of the desert that principally affect predators and their prey are its openness and the paucity of cover. This is re­ stricted to scattered plants, occasional rocks, holes, and crevices in the ground. Furthermore, nightfall does not confer relative invisibility, as it does in many other ecobiomes, because of the clarity of the atmosphere. The bright starlight of the desert renders nearby objects visible even to the human eye, while an incandescent moon bathes the empty landscape with a flood of silver light. Consequently, adaptive coloration is func­ tional at all hours of the day and night.