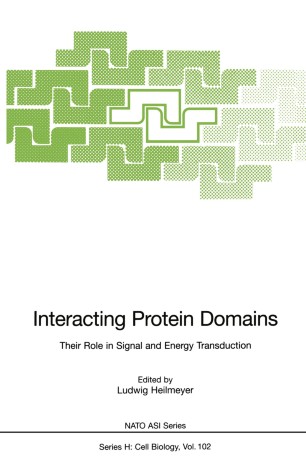 Their Role in Signal and Energy Transduction

This is now the fourth time that protein phosphorylation has been the focus of a NATO Advanced Study Institute. The first meeting with the topic "Signal Trans­ duction and Protein Phosphorylation" was held on the island of Spezai, Greece, in September 1986. The second one took place in Chateau La Londe, France, in September 1989 on "Cellular Regulation by Protein Phosphorylation", the third one on " Tyrosine Phosphorylation/Dephosphorylation and Downstream Signaling" was in September 1992 in Maratea, Italy. The titles of these books clearly mirror the developments that have taken place in the last decade. Beginning with the recognition that protein phosphorylation is at the center of signaling -clearly established in 1990 -it became apparent that many cellular processes are regulated by this mode. A new focus then emerged when it was recognized that growth factors are bound to corresponding receptors trigger protein tyrosine phosphorylation which controls cell prolifera­ tion. This was the topic of the third meeting in this series. It is now evident that further progress depends on understanding the three dimensional structure of the proteins involved. It goes without saying, for example, that understanding the location of proteins by adaptor proteins is only possible on the basis of the three dimensional protein structure. Therefore, the fourth meeting in this series concentrated on the protein structure of signaling molecules as well as on the elucidation of the principles of protein domain interactions.