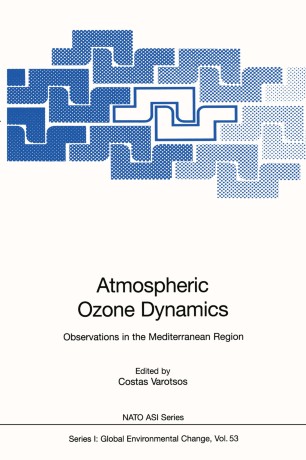 Observations in the Mediterranean Region

An increasing allllo~/allce because of the anthropogenically induced ozone depletion and relevant illcrca5e of the surface ultraviolet (UV) radiation (including erythemal part of the UV spectrum) has resulted in the growth of interest to total ozone (TOZ) surface and satellite observations, surface UV measurements (with an emphasis on UV -B) and. the interpretation of observation results to assess potential impacts of the UV radiation enhancement on man and biosphere. The significance of this phenomenon is diJIcrent in various cowltries. Special attention has been paid, for instance, to ozone depletion and UV radiation increase at high latitudes (this problem has also been discussed during the Workshop). It is equally clear, however, that low and mid-latitude environmental dynamics requires carefuU monitoring and assessment of environm(:ntal trends as well. Such a conclusion is especially true for the Mediterranean Region where numerous resort places are located and subject to excessive levels of Solar Ultraviolet Radiation. This is why the NATO Advanced Rcsearch Workshop "Ground-Level and Satellite Ozone Observations: Changes in the Mediterranean Region" was organized and took place in Athens (Grcccc) during the Lime period 31 October -4 November 1995. It should be pointed out, however, that presentations discussed during the Workshop went far beyond the regional scale of consideration. This has been very important, because it opened an opportwlity to analyse the Mediterrane:an environmental situation in the broader contcx1 of the European global changes.