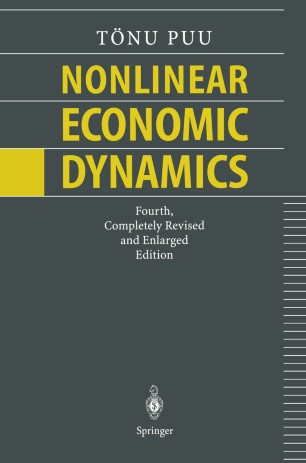 This book was first pUblished in 1989 as volume 336 in the Springer series "Lecture Notes in Economics and Mathematical Systems", and it reappeared in a 2nd edition as a Springer monograph in 1991. After considerable revisions it appeared in a 3rd edition in 1993. The origin, still visible in the 3rd edition, was the joint work of the author with Professor Martin J. Beckmann, documented in two co-authored mono­ graphs "Spatial Economics" (North-Holland 1985), and "Spatial Structures" (Springer-Verlag 1990). Essential dynamics had, however, been almost com­ pletely lacking in these works, and the urge to focus the dynamic issues was great. To fill this particular gap was the aim of the previous editions, and so the spatial aspect provided core and focus. In the present edition a substantial quantity of spatial issues have been removed: All those that were dynamic only in the sense that structures were characterized which were structurally stable, or robust in a changing world. The removed material has meanwhile been published as a separate mono­ graph under the title "Mathematical Location and Land Use Theory" (Springer-Verlag 1996).