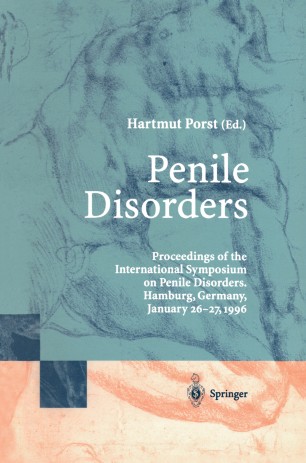 This book contains a compilation of papers based on pres­ entations made at the International Symposium on Penile Disorders held in Hamburg, Germany, 26-27 January 1996, under the Chairmanship of Hartmut Porst. This was a unique conference in that it comprehensively addressed various disorders that affect the organ situated at the "center of the male", the penis. As an important beginning, the sociocultural aspects of the erect phallus were presented by G. Wagner from Copen­ hagen. The anatomy of the penis and the physiological con­ ditions of erection were then discussed by K. -P. J Unemann from Mannheim, Germany. Previous conferences on the penis had concentrated only on specific areas of disease such as impotence. However, it became readily apparent that at this conference something new for almost every as­ pect of disease would be discussed, including congenital disorders such as hypospadias and epispadias, sexually transmitted and noninfectious dermatological diseases, and congenital and acquired penile curvatures and penile fractures. An excellent presentation of managing penile cancer by stage related therapeutic decision was presented by S. C. MUller from Bonn, Germany. There is no better per­ son to present a discussion of Peyronie' s disease in 1996 from a historical and management perspective than J. Pryor from London, UK. This same degree of expertise was also demonstrated by I. Saenz de Tejada from Madrid, Spain, re­ garding priapism.