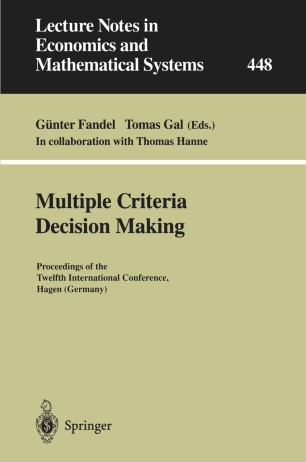 The organizers of the 12th International Conference on Multiple Cri­ teria Decision Making (MCDM) held June 19-23, 1995 in Hagen received the second time the opportunity to prepare an international conference on MCDM in Germany; the first opportunity has been the 3rd International Conference on MCDM in Konigswinter, 1979. Quite a time ellapsed since then and therefore it might be interesting to compare some indicators of the development of the International Society on MCDM, which has been founded in Konigswinter. Stanley Zionts has been elected first president and all 44 participants of that Conference became founding members. Today our Society has over 1200 members and its own Journal (MCDM World Scan). In Hagen, 1996, we had 152 participants from 34 countries. It is interesting to mention that also other Groups established their organi­ zation, like the European Working Group on Multiple Criteria Decision Aid, the German Working Group on Decision Theory and Applications, the Multi­ Objective Programming and Goal Programming Group, ESIGMA, and some others. It is also interesting to note that the intersection of members of all these Groups and Societies is not empty and there is quite a cooperation among them.