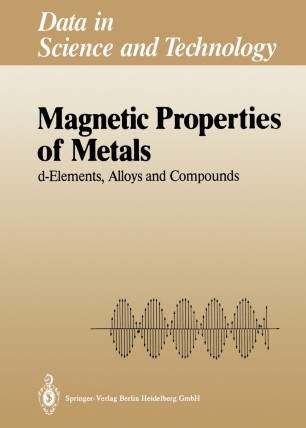 During the last decades the knowledge of the magnetic properties of the d transition elements and of their metallic alloys and compounds has increased widely. The improvement of preparation techniques for well-defined substances, the development of sophisticated measuring methods and above all the drive to obtain more insight in the origin of magnetic interactions in solids have resulted in the publication of many specific magnetic properties for an abundance of all kinds of metallic materials. The data assembled in this booklet are selected from the comprehensive compilation of magnetic and related properties of metals in the Landolt-Bornstein New Series Group III sub­ volumes 19a, band c. It has been attempted to include preferentially those properties which are of a basic character and which therefore are most often needed by scientists active in the field of solid state magnetism. In the field of magnetism, there is a gradual transition from the use of cgs/emu units to SI units. It was, however, not intended to represent all data in the units of one system, regardless of how nice this would have been from a systematic point of view. Instead, mostly preference was given to the system of units that was originally used by the authors whose work is quoted. Thus cgs/ emu units occur most frequently. Of colirse the user of the tables and figures is helped in several ways to convert the data to the units which he is most familiar with, see, e. g.