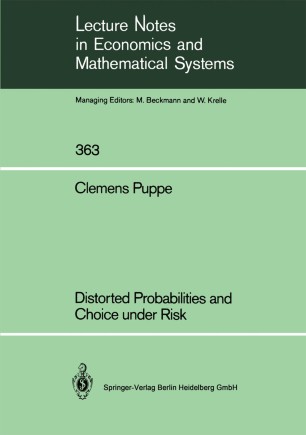 Distorted Probabilities and Choice under Risk

During the development of modern probability theory in the 17th cen­ tury it was commonly held that the attractiveness of a gamble offering the payoffs :1:17 ••• ,:l: with probabilities Pl, . . . , Pn is given by its expected n value L:~ :l:iPi. Accordingly, the decision problem of choosing among different such gambles - which will be called prospects or lotteries in the sequel-was thought to be solved by maximizing the corresponding expected values. The famous St. Petersburg paradox posed by Nicholas Bernoulli in 1728, however, conclusively demonstrated the fact that individuals l consider more than just the expected value. The resolution of the St. Petersburg paradox was proposed independently by Gabriel Cramer and Nicholas's cousin Daniel Bernoulli [BERNOULLI 1738/1954]. Their argument was that in a gamble with payoffs :l:i the decisive factors are not the payoffs themselves but their subjective values u( :l:i)' According to this argument gambles are evaluated on the basis of the expression L:~ U(Xi)pi. This hypothesis -with a somewhat different interpretation of the function u - has been given a solid axiomatic foundation in 1944 by v. Neumann and Morgenstern and is now known as the expected utility hypothesis. The resulting model has served for a long time as the preeminent theory of choice under risk, especially in its economic applications.