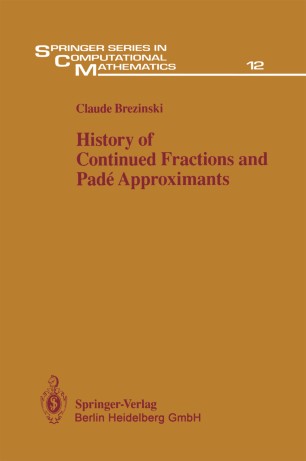 The history of continued fractions is certainly one of the longest among those of mathematical concepts, since it begins with Euclid's algorithm for the great­ est common divisor at least three centuries B.C. As it is often the case and like Monsieur Jourdain in Moliere's "Ie bourgeois gentilhomme" (who was speak­ ing in prose though he did not know he was doing so), continued fractions were used for many centuries before their real discovery. The history of continued fractions and Pade approximants is also quite im­ portant, since they played a leading role in the development of some branches of mathematics. For example, they were the basis for the proof of the tran­ scendence of 11' in 1882, an open problem for more than two thousand years, and also for our modern spectral theory of operators. Actually they still are of great interest in many fields of pure and applied mathematics and in numerical analysis, where they provide computer approximations to special functions and are connected to some convergence acceleration methods. Con­ tinued fractions are also used in number theory, computer science, automata, electronics, etc ...