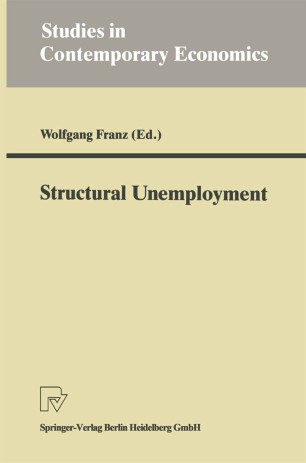 High and persistent unemployment rates in Europe during the eighties gave rise to a lively discussion about the nature and causes of joblessness. Among other sources structural unemployment was blamed for the lack of response of unemployment to increasing aggregate demand. Renewed attention was thus devoted to an analysis of the magnitude and the development of structural unemployment as well to its possi­ ble determinants. In this literature, the Beveridge curve experienced a resurrection and, at first glance, it seemed to be an appropriate tool to analyse the aforementioned issues. However, it was soon recognized that the Beveridge curve, i. e. the relation between unemployment and vacancies, was anything but stable, thus requiring a care­ ful distinction between dynamic loops around a (stable?) long-run Beveridge curve and possible shifts due to, say, an increasing mismatch between labor supplied and demanded. The controversy is far from being settled at the time of this writing. This book contains a collection of hitherto unpublished papers which are devoted to a theoretical and econometric analysis of structural unemployment. The papers put considerable emphasis on the question to what extent the Beveridge curve can serve as an adequate tool for such studies. The countries under consideration are Germany and Austria. In what follows a very brief summary of each paper will be outlined. Franz and Siebeck present, at some length, a theoretical and econometric analysis of the Beveridge curve in Germany.