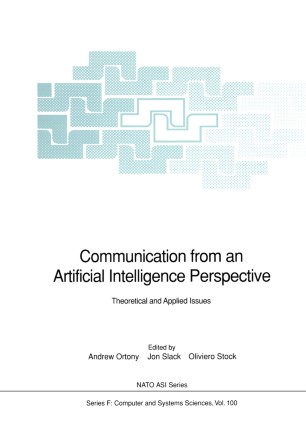 Communication from an Artificial Intelligence Perspective

Castel Ivano, originally built in 1375, is one of many beautiful and impressive castles strategically placed atop hills in Trentino's Valsugana in Northern Italy. It was in this castle on a series of brilliant sunny crisp November days in 1990 that an international group of computer scientists and cognitive scientists met at a workshop to discuss theoretical and applied issues concerning communi­ cation from an Artificial Intelligence and Cognitive Science perspective. About forty people, representing nine countries, participated in the workshop, either as speakers, discussants, or observers. The main motivationfor the workshop wasto address the questionofwhether and how current computational approaches to communication can or might be able to accommodate the range of complexities that characterize both human­ human and human-machine communication. The chapters in this book are based on the papers that were presented at the workshop. They are presented in an order that is determined primarily by the specificity of the topics they address. The initial chapters are more theoretical in nature with an emphasis on formal approaches to communication. The middle chapters focus on particular application issues, such as the generation ofmultimedia documents and the role of planning in building systems to support human-human or human-machine interaction. The final few chapters consider more general issues relating to com­ munication, such as the influence ofsocial structure on, and the role of affect in communication.