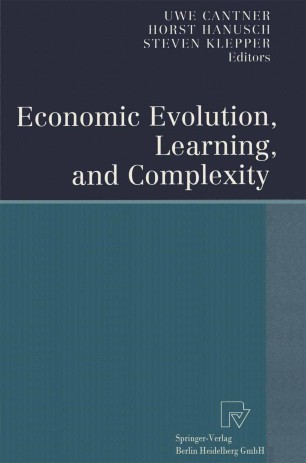 The twelve papers in this collection grew out of the workshop on "Eco­ nomic Evolution, Learning, and Complexity" held at the University of Augsburg, Augsburg, Germany on May 23-25, 1997. The Augsburg workshop was the second of two events in the Euroconference Series on Evolutionary Economics, the first of which was held in Athens, Greece in September 1993. A special issue of the Journal of Evolutionary Econo­ mics (1993(4)) edited by Yannis Katsoulacos on "Evolutionary and Neo­ classical Perspectives on Market Structure and Economic Growth" con­ tains selected papers from the Athens conference. The Athens conference explored neoclassical and evolutionary perspectives on technological competition and increasing returns. It helped to identify the dis­ tinguishing features of evolutionary scholarship. The Augsburg workshop was more oriented toward exploring methodological issues in evolutiona­ of the papers employed new me­ ry and related scholarship. A number thods, such as genetic programming and experimental analysis, some developed new econometric techniques or raised new empirical issues in evolutionary economics, and some relied on simulation techniques. Twelve papers covering a range of areas were selected for this collection. The papers address central issues in evolutionary and Schumpeterian accounts of industrial competition, learning, and innovation.