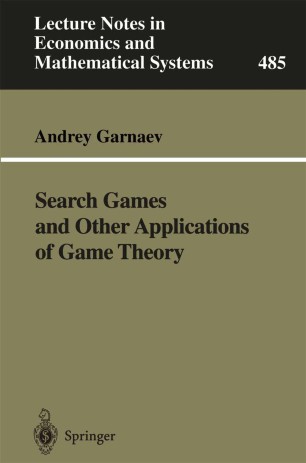 Search Games and Other Applications of Game Theory

This book is on applications of game theory. The title of this book is not "Game Theory and its Applications" because it does not construct a general theory for considered games. The book contains a lot of examples of applica­ tion of game theory together with the background of those games considered and a list of unsolved problems. Also we consider only the game where the optimal strategies of the players are found in closed form. This book is an attempt to carryon the approach developed in nice books "Search Games" by Gal and "Geometric Games and their Applications" by Ruckle. The first chapter of this book supplies the required definitions and theorems from game theory. The second chapter deals with discrete search games where both players act simultaneously: the games of protection of a channel from infiltration of a submarine, the submarine versus helicopter game, the matrix search games and others. The third chapter considers the game where the players allocate their contin­ uous efforts. In these games players face up an alternative either not to come into contest if the cost of efforts seems too high, or come into it. In the last case the player have to decide how much resources they can afford to spend. The allocation models of search, antiballistic protection and marketing are investigated.