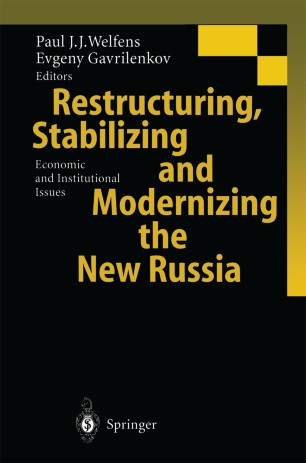 Russia has embarked upon a difficult process of systemic transformation and economic opening up. While the initial strong GDP decline seemed to have ended in 1997, the real development was facing even more difficult problems as output declined sharply after the Ruble and banking crisis of August 1998: inflation started to increase again, exports and imports were falling, capital flight increasing and unemployment rising. There is broad disappointment in Russia regarding the transformation failure in 1998 since so many people had hoped that the end of the Soviet command economy would bring democracy, prosperity and international integration. While Poland has been able to double per capita income in the 1990s it has fallen by 50% in Russia and this despite considerable IMF involvement and some (modest) support from other international organizations. What were the reasons for transformation failure in the 1990s? What are the ingredients for long term sustainable transformation? What are the internal and international requirements to avoid a second - possibly tragic - failure of transformation in Russia? An international group of researchers has focussed on these problems during a two-year research project financed by the Alfried Krupp von Bohlen und Halbach Foundation. A series of papers were presented at workshops in Potsdam, Bonn and Moscow in 1999 where this book is devoted to four important issues: the Russian transformation crisis, the topic of restructuring, the need for stabilizing Russia and the requirements for modernizing Russia.