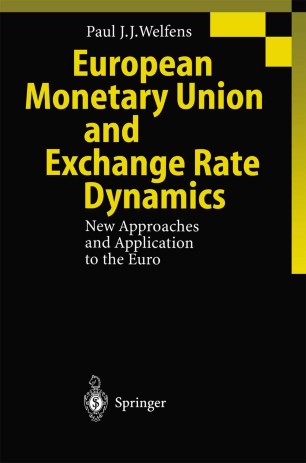 New Approaches and Application to the Euro

The creation of the European System of Central Banks (ESCB) and the start of the Euro in 1999 are historical marks for Europe. With the start of the new currency and the ECB the world economy also is facing a major structural change and new challenges. In a historical perspective the European Monetary Union has the unique feature that a common new institution, the ECB, has been created. This is in marked contrast to the Scandinavian and the Latin Monetary Union (France, Italy, Belgium th and Switzerland) in the late 19 century which was a period in which national central banks were created in order to stabilize the respective national financial systems. In the starting year 1999 the European Central Bank had favorable conditions in the sense that low inflation rates and an economic upswing had coincided; while this should contribute to a Euro appreciation in the long run the short term exchange rate developments were in marked contrast as the new currency lost about 115 of its value within 16 months; while exchange rate volatility has not been unusual in the 1980s the continued and strong fall ofthe Euro vis-a-vis the US dollar, the pound, the Swiss franc and the Yen has raised concerns. The strong initial fall of the Euro has created some problems in establishing the new currency as a strong contender for the US dollar. Moreover, there are some theoretical challenges since the portfolio model offers a rather different message than the purchasing power parity.