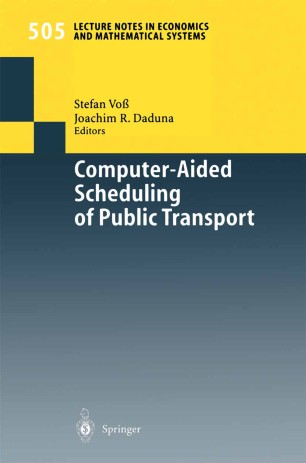 This proceedings volume consists of selected papers presented at the Eighth International Conference on Computer-Aided Scheduling 0/Public Transport (CASPT 2000), which was held at the conference center of the Konrad­ rd Adenauer-Foundation in Berlin, Germany, from June 2pt to 23 , 2000. The CASPT 2000 is the continuation of aseries of international workshops and conferences presenting recent research and progress in computer-aided scheduling in public transport.Previous workshops and conferences were held in • Chicago (1975), • Leeds (1980), • Montreal (1983 and 1990), • Hamburg (1987), • Lisbon (1993) and • Cambridge, Mass. (1997).1 With CASPT 2000, our series of workshops and conferences celebrated th its 25 anniversary. Starting with a Workshop on Automated Techniques [or Scheduling 0/ Vehicle Operators [or Urban Public Transportation Services in 1975 the scope and purpose has broadened since and still continues to do so. The previous workshops and conferences were focused on public mass transit, and while this remained the primary focus ofthe 2000 conference, it included also computer-aided scheduling methods being developed and applied in re­ lated means of passenger transport systems. Commonalities regarding op­ erations research techniques such as, e.g., column generation techniques and 1 While there were no formal proceedings for the first workshop but only a p- printed copy of all papers issued to participants on arrival, the subsequent ones are weil documented as folIows: Wren, A. (Ed.) (1981). Computer Scheduling 0/ Public Transport. North­ Holland, Amsterdam.