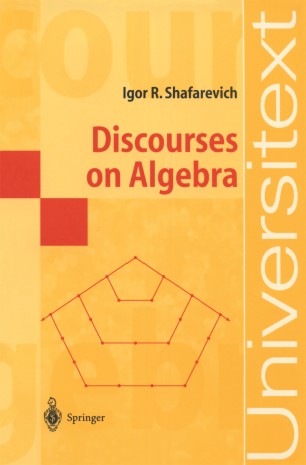 I wish that algebra would be the Cinderella ofour story. In the math­ ematics program in schools, geometry has often been the favorite daugh­ ter. The amount of geometric knowledge studied in schools is approx­ imately equal to the level achieved in ancient Greece and summarized by Euclid in his Elements (third century B. C. ). For a long time, geom­ etry was taught according to Euclid; simplified variants have recently appeared. In spite of all the changes introduced in geometry cours­ es, geometry retains the influence of Euclid and the inclination of the grandiose scientific revolution that occurred in Greece. More than once I have met a person who said, "I didn't choose math as my profession, but I'll never forget the beauty of the elegant edifice built in geometry with its strict deduction of more and more complicated propositions, all beginning from the very simplest, most obvious statements!" Unfortunately, I have never heard a similar assessment concerning al­ gebra. Algebra courses in schools comprise a strange mixture of useful rules, logical judgments, and exercises in using aids such as tables of log­ arithms and pocket calculators. Such a course is closer in spirit to the brand of mathematics developed in ancient Egypt and Babylon than to the line of development that appeared in ancient Greece and then con­ tinued from the Renaissance in western Europe. Nevertheless, algebra is just as fundamental, just as deep, and just as beautiful as geometry.