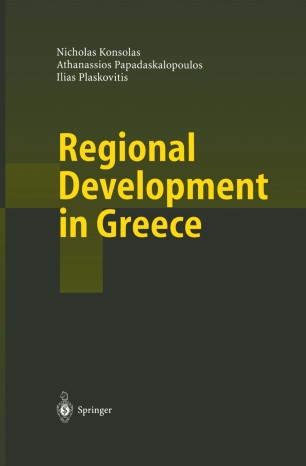 This book is based on the Regional Section of the Development Plan 2000-2006, prepared by the Regional Development Institute according to the Greek Ministry of National Economy's directions and available data. The different development proposals coming from the Country's Regions were also taken into account. The information contained in the Regional Development Institute's database and the conclusions of the studies made by the Institute's collaborators were also used. The thematic maps in this edition were also produced by the Regional Development Institute's GIS (Geographical Information System) laboratory. The Development Plan 2000-2006 was submitted by the Ministry of National Economy to the European Union in September 1999 and represents the basis for the 3rd Community Support Framework's acceptance. The book is organized into four parts. Part one contains six chapters reflecting the evolution of the Greek and European Regional Policy, as well as the trends for the coming period. More specifically, the first part refers to: the Greek Regional Policy of the 1950-1985 period, the EEC Regional Policy, the twenty years of Operational Programme (1986-2006), the evolution of the main objectives and priorities for this period, the evolution of means and processes and the new trends in Regional Policy and Planning. In the second part, the basic figures and trends of Regional Development in Greece are analysed. Specifically, we refer here to the population concentration, the regional distribution of GDP, the employment and unemployment rates and the sector specialisation.