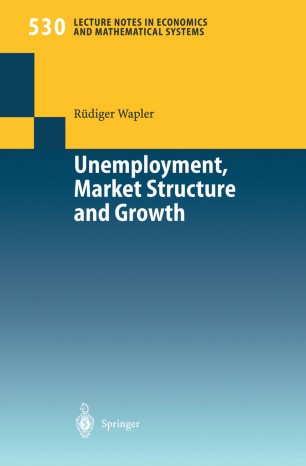 In his Ph. D. thesis, Rudiger Wapler analyses the causes of the persistently high unemployment rates especially in continental Europe. Particular emphasis is placed on imperfect labour and product markets on the one hand, and on the numerous links between unemployment, innovations and growth on the other. Hence, Rudiger Wapler provides an important contribution towards a better understanding of both the development of labour markets as well as the dynamics of growth. To aid readers with only little prior knowledge of labour markets, the book presents the most common theories of unemployment: (1) trade-union models in which union bargaining power leads to wages above their market-clearing level, (2) efficiency-wage models in which employers voluntarily pay higher wages in order to motivate or discipline their workers or to reduce the job­ turnover rate, as well as (3) matching models in which unemployment is caused by the continuous turnover of jobs and workers. In addition, emphasis is placed on the fact that labour needs to be treated as heterogeneous, a fact often neg­ lected in the literature. Subsequently, these labour-market foundations are integrated with modern theories of innovations and growth, making the ap­ proach much more relevant and plausible. Without doubt, the generalisations of the models performed by Rudiger Wapler show that there are limits to such formal analysis. Due to the increasing number of interdependencies, it is doubtful whether even more complex models provide additional (usable) insights.