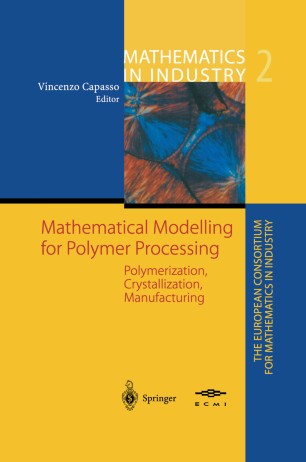 Part of the Mathematics in Industry book series (MATHINDUSTRY, volume 2)

Polymers are substances made of macromolecules formed by thousands of atoms organized in one (homopolymers) or more (copolymers) groups that repeat themselves to form linear or branched chains, or lattice structures. The concept of polymer traces back to the years 1920's and is one of the most significant ideas of last century. It has given great impulse to indus­ try but also to fundamental research, including life sciences. Macromolecules are made of sm all molecules known as monomers. The process that brings monomers into polymers is known as polymerization. A fundamental contri­ bution to the industrial production of polymers, particularly polypropylene and polyethylene, is due to the Nobel prize winners Giulio Natta and Karl Ziegler. The ideas of Ziegler and Natta date back to 1954, and the process has been improved continuously over the years, particularly concerning the design and shaping of the catalysts. Chapter 1 (due to A. Fasano ) is devoted to a review of some results concerning the modelling of the Ziegler- Natta polymerization. The specific ex am pie is the production of polypropilene. The process is extremely complex and all studies with relevant mathematical contents are fairly recent, and several problems are still open.