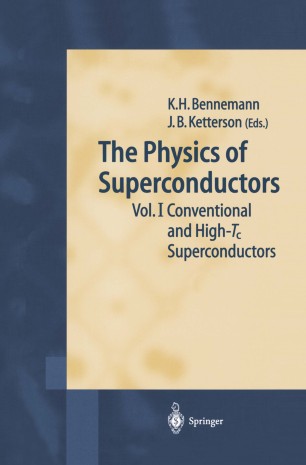 The Physics of Superconductors

Vol. I. Conventional and High-Tc Superconductors

This is the first volume of a comprehensive two-volume treatise on superconductivity. It is the first such publication since the earlier widely acclaimed books of R. Parks. It systematically reviews the basic physics and recent advances in the field. Leading researchers describe the state of the art in conventional phonon-induced superconductivity, high-Tc superconductivity, and in novel superconductivity, including triplet pairing in the ruthenates. Progress in many-body physics, a topic of central and general interest in physics, is presented in many chapters. Volume 1 primarily addresses conventional and high-Tc superconductivity in the cuprates. Many illustrations, figures and numerous tables are included, making this volume especially useful for students, teachers and researchers. The underlying general theory of superconductivity, including the use of Green's functions, is also presented for pedagogical completeness. The second volume (ISBN 3-540-44232-4) is largely concerned with novel supercondutors, such as heavy-fermion metals and organic materials, and also includes granular superconductors. Important new results on current problems are presented in a manner designed to stimulate further research. Together these two volumes will take on the role of the new 'bible' of superconductivity and should become a standard reference work in the field for many years to come. K. Bennemann is professor of physics at the FU Berlin. He graduated from the University of Illinois at Urbana, where he also worked with J. Bardeen. He has also been a research Sloan-fellow. He is known particularly for his research on cluster physics, nonlinear mangneto-optics, and superconductivity. J. Ketterson is professor of physics at Northwestern University, Evanston, Illinois. During earlier years he headed a group at the Argonne National Laboratory working on superfluidity. He is known especially for his research on the de Haas-van Alphen effect in metals and superfluidity.