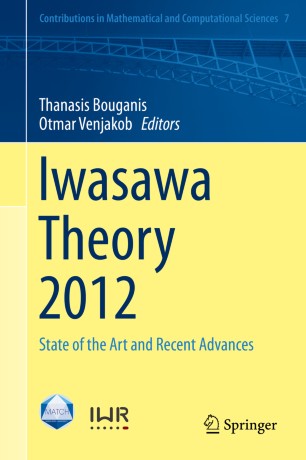 State of the Art and Recent Advances

Part of the Contributions in Mathematical and Computational Sciences book series (CMCS, volume 7)

This is the fifth conference in a bi-annual series, following conferences in Besancon, Limoges, Irsee and Toronto. The meeting aims to bring together different strands of research in and closely related to the area of Iwasawa theory. During the week before the conference in a kind of summer school a series of preparatory lectures for young mathematicians was provided as an introduction to Iwasawa theory.

Iwasawa theory is a modern and powerful branch of number theory and can be traced back to the Japanese mathematician Kenkichi Iwasawa, who introduced the systematic study of Z_p-extensions and p-adic L-functions, concentrating on the case of ideal class groups. Later this would be generalized to elliptic curves. Over the last few decades considerable progress has been made in automorphic Iwasawa theory, e.g. the proof of the Main Conjecture for GL(2) by Kato and Skinner & Urban. Techniques such as Hida’s theory of p-adic modular forms and big Galois representations play a crucial part. Also a noncommutative Iwasawa theory of arbitrary p-adic Lie extensions has been developed.

This volume aims to present a snapshot of the state of art of Iwasawa theory as of 2012. In particular it offers an introduction to Iwasawa theory (based on a preparatory course by Chris Wuthrich) and a survey of the proof of Skinner & Urban (based on a lecture course by Xin Wan).