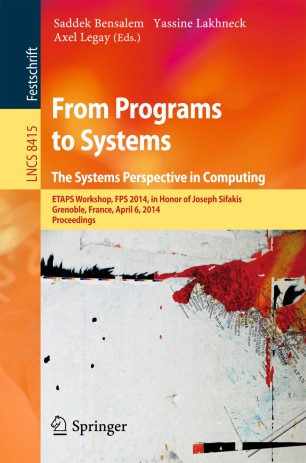 From Programs to Systems. The Systems perspective in Computing

"From Programs to Systems - The Systems Perspective in Computing" workshop (FPS 2014) was held in honor of Professor Joseph Sifakis in the framework of the 16th European Joint Conferences on Theory and Practice of Software, ETAPS, in Grenoble, April 2014.
Joseph Sifakis is an active and visionary researcher in the area of system design. He believes that endowing design with scientific foundations is at least of equal importance as the quest for scientific truth in natural sciences. Previously, he has worked on Petri nets, concurrent systems, program semantics, verification, embedded systems, real-time systems, and formal methods more generally. The book contains 18 papers covering various topics related to the extension of programming theory to systems.