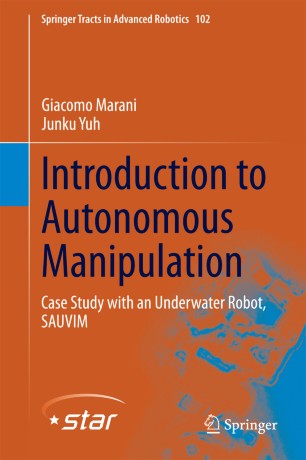 “Autonomous manipulation” is a challenge in robotic technologies. It refers to the capability of a mobile robot system with one or more manipulators that performs intervention tasks requiring physical contacts in unstructured environments and without continuous human supervision. Achieving autonomous manipulation capability is a quantum leap in robotic technologies as it is currently beyond the state of the art in robotics.

This book addresses issues with the complexity of the problems encountered in autonomous manipulation including representation and modeling of robotic structures, kinematic and dynamic robotic control, kinematic and algorithmic singularity avoidance, dynamic task priority, workspace optimization and environment perception. Further development in autonomous manipulation should be able to provide robust improvements of the solutions for all of the above issues. The book provides an extensive tract on sensory-based autonomous manipulation for intervention tasks in unstructured environments. After presenting the theoretical foundations for kinematic and dynamic modelling as well as task-priority based kinematic control of multi-body systems, the work is focused on one of the most advanced underwater vehicle-manipulator system, SAUVIM (Semi-Autonomous Underwater Vehicle for Intervention Missions). Solutions to the problem of target identification and localization are proposed, a number of significant case studies are discussed and practical examples and experimental/simulation results are presented. The book may inspire the robot research community to further investigate critical issues in autonomous manipulation and to develop robot systems that can profoundly impact our society for the better.