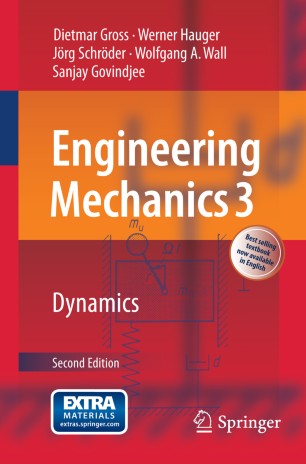 Dynamics is the third volume of a three-volume textbook on Engineering Mechanics. It was written with the intention of presenting to engineering students the basic concepts and principles of mechanics in as simple a form as the subject allows. A second objective of this book is to guide the students in their efforts to solve problems in mechanics in a systematic manner. The simple approach to the theory of mechanics allows for the different educational backgrounds of the students. Another aim of this book is to provide engineering students as well as practising engineers with a basis to help them bridge the gaps between undergraduate studies, advanced courses on mechanics and practical engineering problems. The book contains numerous examples and their solutions. Emphasis is placed upon student participation in solving the problems. The contents of the book correspond to the topics normally covered in courses on basic engineering mechanics at universities and colleges. Volume 1 deals with Statics; Volume 2 contains Mechanics of Materials.

Werner Hauger studied Applied Mathematics and Mechanics at the University of Karlsruhe and received his Ph.D. in Theoretical and Applied Mechanics from Northwestern University in Evanston. He worked in industry for several years, was a Professor at the Helmut-Schmidt-University in Hamburg and went to the University of Darmstadt in 1978. His research interests are, among others, theory of stability, dynamic plasticity and biomechanics.

Wolfgang A. Wall studied Civil Engineering at Innsbruck University and received his doctoral degree from the University of Stuttgart. Since 2003 he is Professor of Mechanics at the TU München and Head of the Institute for Computational Mechanics. His research interests cover broad fields in computational mechanics, including both solid and fluid mechanics. His recent focus is on multiphysics and multiscale problems as well as computational biomechanics.

Sanjay Govindjee received his SB from MIT and an MS and PhD from Stanford University in mechanical engineering. He was an engineering analyst at the Lawrence Livermore National Laboratory (1991-93) and Professor of Mechanics at ETH Zurich (2006-08). Currently he is a Chancellor’s Professor and Professor of Civil Engineering at the University of California Berkeley (1993-2006, 2008-present). His expertise lies in computational mechanics and the modeling of materials based upon molecular and atomic structure with a particular emphasis upon polymeric based materials, large deformations, and inelastic phenomena.