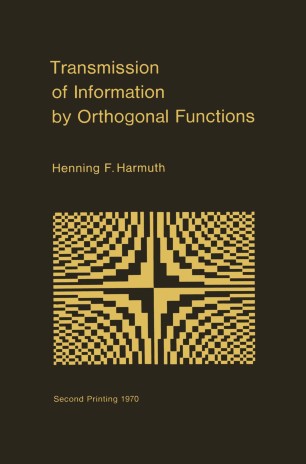 Transmission of Information by Orthogonal Functions

The orthogonality of functions has been exploited in communications since its very beginning. Conscious and extensive use was made of it by KOTEL' NIKOV in theoretical work in 1947. Ten years later a considerable number of people were working in this field rather independently. However, little experimental use could be made of the theo­ retical results before the arrival of solid state opera­ tional amplifiers and integrated circuits. A theory of communication based on orthogonal functions could have been published many years ago. However, the only useful examples of orthogonal functions at that time were sine-cosine functions and block pulses, and this made the theory appear to be a complicated way to derive known re­ sults. It was again the advance of semiconductor techno­ logy that produced the first really new, useful example of orthogonal functions: the little-known Walsh functions. In this book emphasis is placed on the Walsh functions, since ample literature is available on sine-cosine func­ tions as well as on block pulses and pulses derived from them.