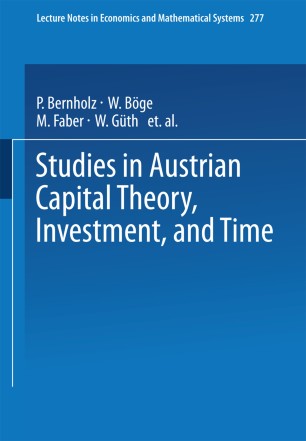 The neglect of time in general and of the time structure of production in particular in mainstream economics led to the rebirth of the Austrian tradition in the seventies. The names of BERNHCLZ, HICKS, KIRZNER and VON WEIZSACKER are representative of different approaches. In 1979 my "Introduction to Modern Austrian Capital Theory" appeared, in which I unified various papers BERNHOLZ and I had written. I also linked our approach to those of VON NEUMANN, of HICKS and of neoclassical capital theory. These "Studies" supplement and continue my "Introduction" in various ways. With all the authors of the present volume I have cooperated for several years. This volume is subdivided into five parts. The first one, Historical Perspectives, gives first an outline on the development of Austrian capital theory from its origins to the present. Next it relates Modern Austrian Capital Theory to SRAFFA's theory and to the Austrian subjectivists' pure time preference theory of interest. The latter theory is represented in its opposition to the traditional productivity-cum-time preference explanation of interest, which is. common t9 neoclassical and BOHM-BAWERKian capital theory alike. The Austrian subjectivist pure time preference theory has been misinterpreted in its recent presentation, which has led to misunderstandings. It is shown that there is no real contradiction between the two appoaches.