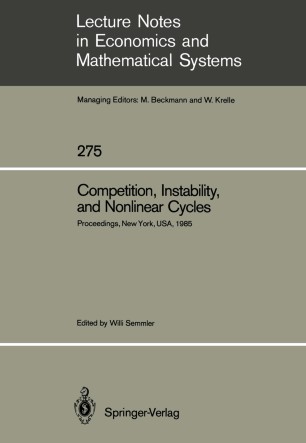 I. The Topic and the structure of the Proceedings The papers in this book are the proceedings of a conference held at the Economics Department of the Graduate Faculty of the New School for Social Research in March 1985 in New York for which financial support was provided by .the West German Consulate. The topic of the conference was "Competition, Instability, and Nonlinear Cycles." A number of mathematical economists from Italy, West Germany, France, Japan, and the u.s. were invited as participants in this meeting. The conference was preceded by two other conferences in which several of the invited scholars had taken part. One, on "la gravitation des prix," took place in Nanterre, France,in March 1984. The other was held at the New School for Social Research in April 1984 on "Price of Production in Joint Production systems." Both conference were concerned with classical prices of production systems and their revival in the form developed by Sraffa and Pasinetti (1977). In these conferences, considerable interest arose in more properly modeling the dynamics of prices of production systems in a multi­ sectoral framework by utilizing modern mathematical tools of dynamical systems. Such a discussion on the dynamics of the classical process of competition and the stability of classical production prices was originally initiated by several papers by Nikaido (1977, 1983, 1984) and further pursued by several scholars (see Steedman, 1983; Boggio, 1980; Kuroki, 1983; Dumenil/Levy, 1983; Krause, 1983, 1984; Hosoda, 1985; Filippini, 1985).