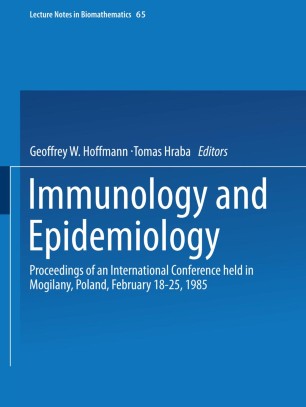 Proceedings of an International Conference held in Mogilany, Poland, February 18–25, 1985

In February 1985 a small international meeting of scientists took place at the recreation resort of the Polish Academy of Sci­ ences in Mogilany, near Cracow, Poland. The initiative for holding the workshop came from a working meeting on mathematical immunology and related topics at the International Institute for Applied Sys­ tems Analysis in Laxenburg, Austria, in November 1983. In addition to representatives of IIASA, delegates of the IIASA National Member Organizations (NMO) of Czechoslovakia, Italy, and the soviet Union took part in that working meeting. The participants came to the conclusion that IIASA could play an important role in facilitating the development of research in this field. The first step that they recommended to I IASA was to organize a workshop on mathematical immunology. The purpose of the workshop was to review the progress that has been made in applying mathematics to problems in immunology and to explore ways in which further progress might be achieved, especially by more efficient interactions between scientists working in mathematical and experimental immunology. Some National Member Organizations contributed to the success of the workshop by nominat­ ing further participants working in this or related fields. For instance, thanks to a suggestion of the British NMO, the meeting also included analyses of the interactions between the immune state of a population and epidemiological phenomena. There were 33 participants at Mogilany from 11 countries, namely Canada, Czechoslovakia, Federal Republic of Germany, Hungary, Japan, Netherlands, Poland, Sweden, united Kingdom, USA, and USSR.