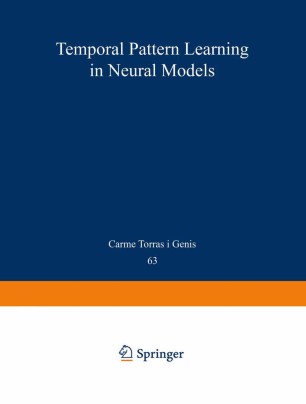 While the ability of animals to learn rhythms is an unquestionable fact, the underlying neurophysiological mechanisms are still no more than conjectures. This monograph explores the requirements of such mechanisms, reviews those previously proposed and postulates a new one based on a direct electric coding of stimulation frequencies. Experi­ mental support for the option taken is provided both at the single neuron and neural network levels. More specifically, the material presented divides naturally into four parts: a description of the experimental and theoretical framework where this work becomes meaningful (Chapter 2), a detailed specifica­ tion of the pacemaker neuron model proposed together with its valida­ tion through simulation (Chapter 3), an analytic study of the behavior of this model when submitted to rhythmic stimulation (Chapter 4) and a description of the neural network model proposed for learning, together with an analysis of the simulation results obtained when varying seve­ ral factors related to the connectivity, the intraneuronal parameters, the initial state and the stimulation conditions (Chapter 5). This work was initiated at the Computer and Information Science Depart­ ment of the University of Massachusetts, Amherst, and completed at the Institut de c Lber n e t Lca of the Universitat Politecnica de Catalunya, Barcelona. Computers at the latter place have adopted Catalan as their mother tongue and thus some computer-made figures in this monograph, specially those in Chapter 5, appear labeled in that tongue.