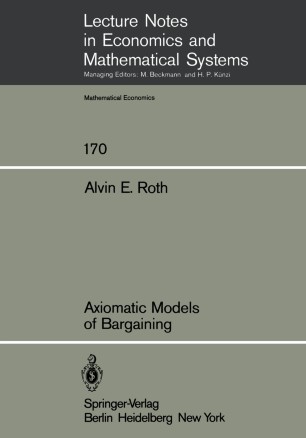 The problem to be considered here is the one faced by bargainers who must reach a consensus--i.e., a unanimous decision. Specifically, we will be consid­ ering n-person games in which there is a set of feasible alternatives, any one of which can be the outcome of bargaining if it is agreed to by all the bargainers. In the event that no unanimous agreement is reached, some pre-specified disagree­ ment outcome will be the result. Thus, in games of this type, each player has a veto over any alternative other than the disagreement outcome. There are several reasons for studying games of this type. First, many negotiating situations, particularly those involving only two bargainers (i.e., when n = 2), are conducted under essentially these rules. Also, bargaining games of this type often occur as components of more complex processes. In addi­ tion, the simplicity of bargaining games makes them an excellent vehicle for studying the effect of any assumptions which are made in their analysis. The effect of many of the assumptions which are made in the analysis of more complex cooperative games can more easily be discerned in studying bargaining games. The various models of bargaining considered here will be studied axioma- cally. That is, each model will be studied by specifying a set of properties which serve to characterize it uniquely.