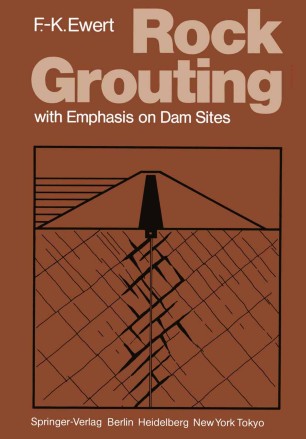 with Emphasis on Dam Sites

Fifteen years have passed since I was working at a dam site super­ vising grouting work. That was not the first time that I had to car­ ry out engineering geological investigations for several similar projects, which always included testing programmes to find out the permeability of the rock, and often I was in charge of grouting work. It thus attracted my attention when this particular grouting programme did not run as intended: most of the grout holes took only very little grout! It could not be the aim of the invested work simply to drill holes and fill them again without bringing about any further improvement. Fortunately, I had the chance to be en­ gaged in many other grouting programmes in the following years and used all these examples to analyse as thoroughly as possible the permeability of the rocks being treated in view of their grout­ ability. The more I studied, the stronger my conviction grew that our rules which had decided the grouting of rock for many de­ cades should be developed further, and therefore I occupied my­ self with contributing some ideas for a new basis to investigation and judgment of permeability of rock and for a more adequate application of this technology.