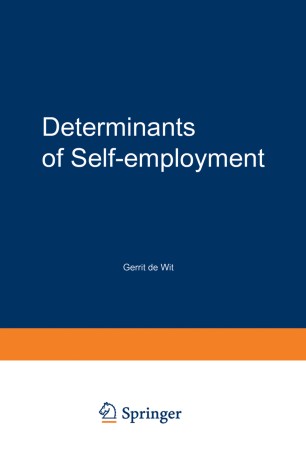 This book is the result of five years of research that I carried out as a research fellow at the Faculty of Economics and Econometrics of the University of Amsterdam. The project was initiated in 1986 by Frans van Winden and Roy Thurik. Frans van Winden became interested in self­ employment through his work concerning government behavior. In the models that he employs, the government is influenced by various social groups, the political strength of which is related to their size. As one of these is the group of self-employed individuals, he became interested in determinants of the size of this group. Roy Thurik was professionally interested in the subject because of his work at the Research Institute for Small and Medium-sized Business in the Netherlands (EIM), an institute that does much research in this area. Together, they wrote a proposal for a research project, for which they received funding from the Dutch Ministry of Economic Affairs . These funds were supplemented by the University of Amsterdam and at a later stage by the Organization for the Advancement of Research in the Economic Discipline (ECOZOEK), that is part of the Netherlands Organization for Scientific Research (NWO). This support is gratefully acknowiedged. The commercial edition of this book was partIy financed by the Centre for Energy Conservation and Environmental Technology (CE), the Center for Research in Experimental Economics and Political Decisionmaking (CREED), and the University of Amsterdam.