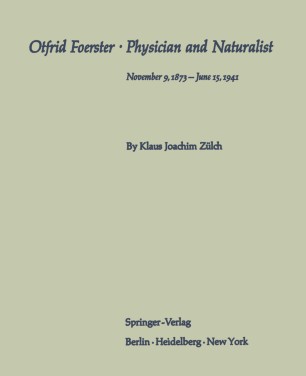 The :l:5th of June, :1:966 marked the 25th anniversary of the death of OTFRID FOERSTER, one of those scientists who achieve international recognition in their younger years. He ranks among the greatest of the German neurologists and he stands as a peer among the great names of the world responsible for the shaping of the image of Neurology: HUGHLINGS JACKSON, CHARCOT, DUCHENNE DE BOULOGNE, DEJERINE, ERB, Sir HENRY HEAD, MONAKow, and SHERRINGTON. As if possessed by adernon FOERSTER spent hirns elf indefatigably to achieve his almost superhuman task during his lifetime. His work will remain a determinant for Neurology for a long time to come. Let his own publications speak for hirn. The epilogues, written shortly after his death, picture hirn more vividly than can be done today. A short biography and a number of memoirs introduce excerpts from his scientific presentations, many of which are intro­ duced by abrief prefatory note regarding the circumstances of the specific project. Our gratitude is extended to the Springer Publishing House for facilitating an English translation of the original German edition prepared for the Joint Annual Meeting of the "German Society for Neurology" and the "German Society for Internal Medicine", :1:966. And I should also like to express my gratitude to Dr. ADOLF ROSENAUER and Dr. JOSEPH EVANS for their translations.