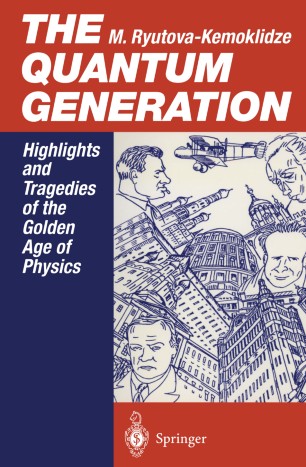 Highlights and Tragedies of the Golden Age of Physics

Quantum mechanics dates its anniversaries from 1925, the year when its first versions, matrix and wave mechanics, were born. The quan­ tum itself had by that time reached the age of 25, having first seen the light of day on the eve of the nativity of the 20th century itself. Either shunned or completely unnoticed, the quantum seemed for a long time to be an illegitimate child. Even Max Planck himself, its own father, could not bring himself to accept his monstrous child until he was forced to do so -that is, until it became clear that the problems which were arising in physics could not be solved without the quantum. At first the quantum "like a greasy stain, soaked through all the different branches of physics" and then, like an explosion, came the creation of quantum mechanics. The overwhelming majority of those who first created quantum mechanics were just about of an age with the quantum itself. These were very young people, born as the new century was born, give or take a year or so. Hence the phrase was coined - "the quantum generation". At that time there was quantum everything - towns, steps, park benches, lodging houses and so, natu­ rally, the quantum generation.