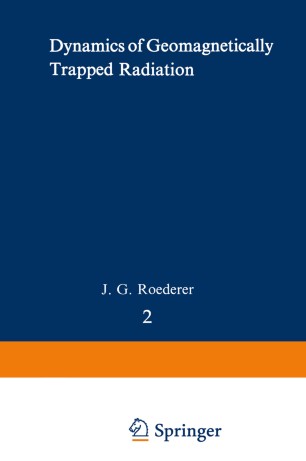 Part of the Physics and Chemistry in Space book series (SPACE, volume 2)

Since the discovery of geomagnetically trapped radiation by Van Allen in 1958, an impressive amount of experimental information on the earth's particle and field environment has nourished research work for scores of scientists and thesis work for their students. This quest has challenged space-age technology to produce better and more sophisticated instru­ ments and has challenged the international scientific community and governments to establish more, and more effective, cooperative programs of research and information exchange. As a result, an orderly picture of the principal physical mechanisms governing the earth's radiation environment is beginning to emerge. The interest in this topic has reached far beyond the domain of geo­ physics. Indeed, we find trapped radiation elsewhere in the universe: Jupiter's radiation belts, particle trapping in sunspot magnetic fields, cosmic rays confined in interstellar fields and, possibly, ultra-high-energy particles trapped in the magnetic fields of rotating neutron stars. There is abundant technical and scientific literature available on Van Allen radiation; comprehensive reviews are published regularly in journals* or have been collected in book form**, and books have been written on the subject***. The aim of this monograph is to complement the existing literature with a concise discussion of the basic dynamical processes that control the earth's radiation belts. It is mainly intended to help a graduate student or a researcher new to this field to understand the underlying physics and to provide him with guidelines for quantita­ tive, numerical applications of the theory.