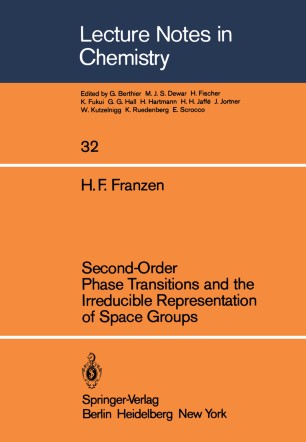 Second-Order Phase Transitions and the Irreducible Representation of Space Groups

The lecture notes presented in this volume were developed over a period of time that originated with the investigation of a research problem, the distortion from NiAs-type to MnP-type, the group-theoretical implications of which were investigated in collaboration with Professors F. Jellinek and C. Haas of the Laboratory for Inorganic Chemistry at the University of Groningen during the 1973-1974 year. This distortion provides the major example that is worked through in the notes. The subject matter of the notes has been incorporated in part in the lectures of a course in Solid State Chemistry taught several times at Iowa State University, and formed the basis of a series of lectures presented at the Max-Planck Institute for Solid State Research in Stuttgart during 1981- 19821 and as part of a Solid State Chemistry course taught during the spring of 1982 at Arizona State University in Tempe. I wish here to express my gratitude to the Max-Planck Institute for Solid State Research and to Arizona State University for the opportunity and support they provided during the time I was developing and writing the lecture notes of this volume. I wish also to thank the many colleagues and students who have offered comments and suggestions that have improved the accuracy and readability of the notes, and who have provided stimulation through discussion of the ideas presented here. am especially indebted to Professors C. Haas and F.