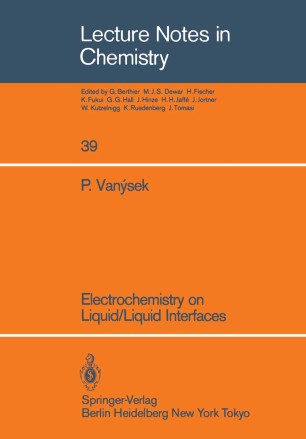 A charge transfer across the interface between two immiscible liquid media has an important role both in nature and in man-designed applications. Ion transfer across the biological membranes, behavior of ion-selective electrodes with liquid membranes and similar sensors, extraction processes, phase transfer catalysis and applications in electroanalytical chemistry can serve as examples. Present interest in the interface between two immiscible electrolytes (liquid liquid or L/L interface) was originated by Koryta's idea (Koryta, Vanysek and Brezina 1976) that the interface between immiscible liquids could serve as a simple model for one half of a biological membrane in the contact with the surrounding electrolyte. It was also Koryta who started using the acronym ITIES (Interface between Two Immiscible Electrolyte Solutions) which generally encompasses all the phenomena discussed in this book. Physiological and electrochemical investigations have certainly well established tradition. In his classic experiments with frog thighs Luigi Galvani discovered in 1791 relationship between electricity and nerves and muscles. As outlined by Koryta and Stullk (1983) in the introduction to their book, the study of electrophysiological phenomena did not progress much for several decades and only a few experiments were performed. For instance M. Faraday (Williams, 1965) studied the electricity produced by an electric fish and Du Bois-Reymond (1848) suggested that the surface of biological formations have properties similar to the electrode of a galvanic cell. However, the properties of biological membrane could not be explained before the first concept of electrochemistry was postulated.