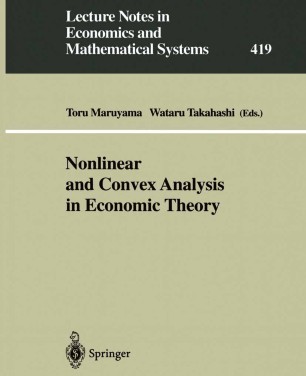 The papers collected in this volume are contributions to T.I.Tech./K.E.S. Conference on Nonlinear and Convex Analysis in Economic Theory, which was held at Keio University, July 2-4, 1993. The conference was organized by Tokyo Institute of Technology (T. I. Tech.) and the Keio Economic Society (K. E. S.) , and supported by Nihon Keizai Shimbun Inc .. A lot of economic problems can be formulated as constrained optimiza­ tions and equilibrations of their solutions. Nonlinear-convex analysis has been supplying economists with indispensable mathematical machineries for these problems arising in economic theory. Conversely, mathematicians working in this discipline of analysis have been stimulated by various mathematical difficulties raised by economic the­ ories. Although our special emphasis was laid upon "nonlinearity" and "con­ vexity" in relation with economic theories, we also incorporated stochastic aspects of financial economics in our project taking account of the remark­ able rapid growth of this discipline during the last decade. The conference was designed to bring together those mathematicians who were seriously interested in getting new challenging stimuli from economic theories with those economists who were seeking for effective mathematical weapons for their researches. Thirty invited talks (six of them were plenary talks) given at the conf- ence were roughly classified under the following six headings : 1) Nonlinear Dynamical Systems and Business Fluctuations, . 2) Fixed Point Theory, 3) Convex Analysis and Optimization, 4) Eigenvalue of Positive Operators, 5) Stochastic Analysis and Financial Market, 6) General Equilibrium Analysis.