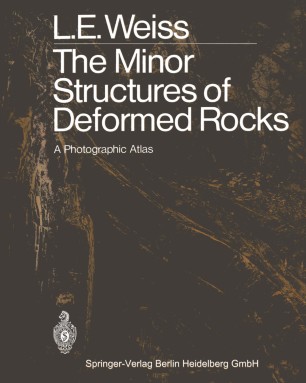 The Minor Structures of Deformed Rocks

Perhaps the most striking impression gained by a geologist during twenty years of field work with deformed rocks in many parts of the world is that the minor structures in these rocks are surprisingly uniform in their properties and restricted in their variety. In fact, a relatively short and simple list can include all structures which are both of common occurrence and of use to the structural geologist in his attempts to understand the structure and evolution of a deformed geologic body. The photographs in this book have been selected to illustrate as clearly as possible the obvious characteristics of the common minor structures of deformed rocks. I have tried to make this selection truly representative in spite of two factors that have affected the choice. First, I have included only photographs made during my own field work. No doubt the selection could have been greatly improved in both quality and variety by including photographs made by other geologists. Second, the photographs necessarily reflect my own inte­ rests and not those of every geologist concerned with deformed rocks. Consequently, for example, great emphasis has been placed on folds, whereas faults and joints are entirely omitted.