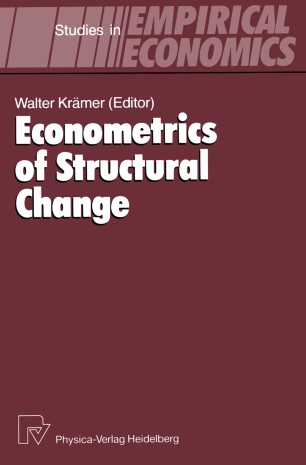 Econometric models are made up of assumptions which never exactly match reality. Among the most contested ones is the requirement that the coefficients of an econometric model remain stable over time. Recent years have therefore seen numerous attempts to test for it or to model possible structural change when it can no longer be ignored. This collection of papers from Empirical Economics mirrors part of this development. The point of departure of most studies in this volume is the standard linear regression model Yt = x;fJt + U (t = I, ... , 1), t where notation is obvious and where the index t emphasises the fact that structural change is mostly discussed and encountered in a time series context. It is much less of a problem for cross section data, although many tests apply there as well. The null hypothesis of most tests for structural change is that fJt = fJo for all t, i.e. that the same regression applies to all time periods in the sample and that the disturbances u are well behaved. The well known Chow test for instance assumes t that there is a single structural shift at a known point in time, i.e. that fJt = fJo (t< t*), and fJt = fJo + t1fJ (t"?:. t*), where t* is known.