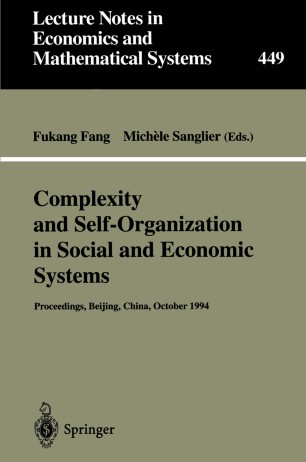 Complexity and Self-Organization in Social and Economic Systems

Proceedings of the International Conference on Complexity and Self-Organization in Social and Economic Systems Beijing, October 1994

The Instituts Internationaux de Physique et de Chimie fondis par E. Solvay and the Institute of Nonequilibrium systems of Beijing Normal University jointly sponsored a conference on "The Complexity and Self-organization in Socio­ economic Systems" on October 17-20, 1994 at Beijing, China. The purpose of the conference was to explore the complexity and evolutionary laws of socio­ economic systems through nonlinear dynamic systems and self-organization theory. The conference was chaired by Professor M. Sanglier and Professor Fang Fukang and was introduced by the Nobel prize winner, Professor I. Prigogine and the vice director of the Chinese National System Reform Committee, Mr. Wu Jie. The conference was held at an important time. On the one hand, the research in the natural sciences about the evolution of complex systems has made great progress, modern scientific theories such as nonlinear dynamic system theory and self-organization theory are becoming more and more mature and a series of methods dealing with these complex systems are being developed which enable us to understand and study non equilibrium, uncertainty and instability. On the other hand, human societies around the world witness a general increase of connectedness, interactivity and an increase of reaction speeds to decisions. In this context, the deterministic, linear way of thinking becomes more and more inadequate and this stimulates the development of non linear science.