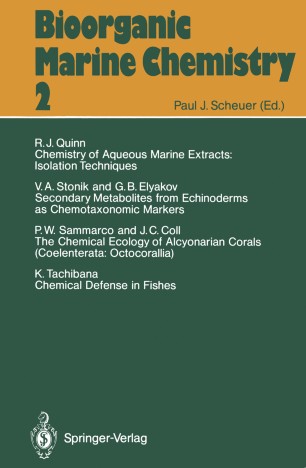 Burgeoning research into marine natural products during the past two decades has in no small measure been due to an heightened and world-wide interest in the ocean, to the development of new sophisticated computer-driven instrumentation, and to major advances in separation science. Organic chemists have been fully aware that processes in living systems occur in an aqueous medium. Nevertheless, the chemists who have specialized in the study of small molecules have found it expedient to use organic rather than aqueous solvents for the isolation and manipulation of secondary metabolites. The emergence of new chromatographic techniques, the promise of rewarding results, not to mention the relevance of polar molecules to life itself, have contributed to a new awareness of the importance of organic chemistry in an aqueous medium. The first chapter in Volume 2 of Bioorganic Marine Chemistry reflects the growing interest and concern with water-soluble com­ pounds. Quinn, who pioneered the separation of such molecules, has contributed a review which closely links techniques with results and is based on practical experience. The second chapter, by Stonik and Elyakov, examines the vast chemical literature of the phylum Echinodermata - over one fourth of it in difficulty accessible Russian language publications. The Soviet authors evaluate the data for their suitability as chemotaxonomic markers.